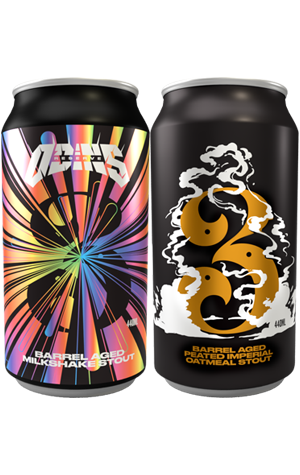 They don't tend to do things by halves at 3 Ravens, and that's certainly the case as they mark the 2021 winter solstice. As well as holding their second Dark Mass event, they've put out two hefty imperial stouts.

Odin's Reserve is a collab with the booze-loving Vikings at Mjölner, inspired by their signature cocktail, Odin’s Brew – a spin on espresso martini featuring Muesli syrup, coffee liqueur and goat's milk, and garnished with chocolate and tonka beans. As well as a complex grain bill that includes rye and oats, the original beer brewed in 2020 – and released as Odin's Brew – was dosed with lactose, cacao, tonka beans, vanilla and coconut. Some of the beer then spent time in French and American oak barrels and hogsheads before another round of freshly roasted Peruvian cacao nibs and shredded coconut was added.

If I was judging the result as a boxing match, it would be a case of barrel-ageing 1-0 milkshake stout. It looks less dense than a beer of such heft might, with memories of sweet liqueurs flooding the synapses: Muscat meets cola or a Tia Maria cocktail, perhaps. With heaps of vanilla and coconut, Demerara sugar, chocolate ice cream topping, and sticky berries at play, this is very much one for the sweet-toothed out there.

As for BAPIOS, or Barrel-Aged Peated Imperial Oatmeal Stout to use its full name, it's one of the biggest beers to ever come our way, up there with Dark Tokyo Horizon from Mikkeller, BrewDog and Nøgne Ø and not far off Boatrocker's Dramjet, which was blended with whisky. To get there, 3 Ravens included heavily peated distilling malt in the grain bill then utilised a reiterated mashing technique, an extended boil and brewing sugars to create an "incredibly dense wort" which was "assertively bittered" with Aussie hop Topaz. It then spent a year in ex-rye whiskey barrels from Gospel in Brunswick.

In the glass, it looks a little like both aforementioned big beers, losing some of the viscosity found in less boozy stouts due to the ABV. On the nose it's all barrels, booze and molasses, with the peat really coming through on the palate, where there's a leathery edge to the sozzled dark fruits and a warmth that spreads through your noggin in the manner of a hard liquor. Ideally, share with mates, and definitely steer clear of heavy machinery.