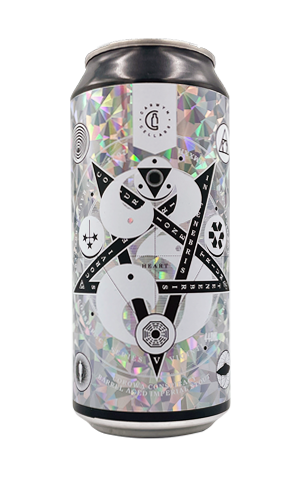 Keeping track of most breweries' release schedules these days is tricky enough; with 3 Ravens, even staying on top of their beer series can be a challenge. Indeed, it can feel a little like trying to remember how all the parts of the Marvel Cinematic Universe fit together if you're anything less than a hardcore fan of said sprawling enterprise.

As their Conspiracy series with Carwyn Cellars returns, it does so with the sort of can that could even double as a magical artefact with a role to play in the latest misadventure of, I dunno, Thor or Dr Strange. There's an inverted pentagram, Latin, symbols like the Bridget Riley artworks I was admiring in the National Gallery of Victoria yesterday, and a dazzling silver background akin to thousands of shards of glass (or Superman's Fortress of Solitude, if we're allowed to dip into DC Comics for a moment). As we said when tackling the opening quartet in this Conspiracy, these collaborators don't like to do anything by halves.

You could argue that neither do we when it comes to beer reviews, so I'll try to get to the crux of the matter: the imperial stout inside that was designed to be aged in ex-whisky barrels before doing so for 12 months in Hungarian oak hogsheads from Corowa Distillery.

One has to assume there was a fair amount of the former inhabitant still sloshing around as there's one heck of a juicy, spicy whisky character just bursting to burrow its way into your noggin. It brings an Amaretto-like liqueur character along as wingman, leaving the imperial stout at its heart waiting until it hits your taste buds before breaking through. And while all such beers are best addressed once they've had time to warm up outside your fridge / cellar, here it really is the case: I reckon Corowa Conspiracy grows into itself the closer it gets to room temperature, allowing the chocolate fudge, dark and dried fruits, and oak-derived elements to have more of a say alongside the whisky.

Considering its 12.7 percent ABV heft, it's not overly dense in texture – presumably the almost tannic, deeply drying bitterness helps to keep things from getting sticky. And, who knows, perhaps this is what the 3 Ravens brewers were referring to when they described the mouthfeel as "purple velour"...