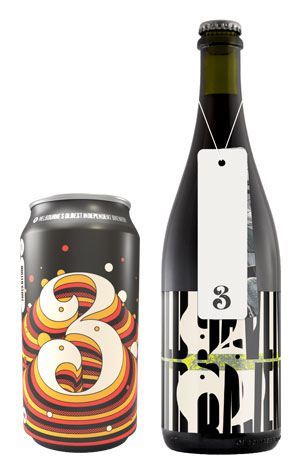 You think silly beer season might be over with the end of the final leg of GABS for 2022, then what do you know: you're heating stout in a saucepan and preparing to trying different additions and garnishes...

Nevermore Mulled Stout is part of 3 Ravens' never-to-be-repeated series of beers and is inspired by the mulled drinks enjoyed over winter. In this case it's a sweet stout with additions of cinnamon, star anise, clove and allspice, which, to me at least, don't just spice the beer but dry it out. Indeed, when attempting a few of the brewers' suggested augmentations, I found stirring in some wild honey was arguably the most effective as it brought some of that sweetness back. Experimenting with a lighter Islay whisky reminded me of a liqueur coffee, while the addition of an orange slice and / or cinnamon quill added a roundness. As much playful experience as beer, I’d suggest heading to the brewery and picking their brains to see what they found worked best.

It seems weird to describe a barrel-aged and blended golden sour featuring an ingredient list 21 strong as a more normal beer, but here we are... This Wild Raven release is Bière de Miel and the brewers are calling it an "almost-braggot" thanks to refermentation on yellow gum honey. And it certainly is golden to look at, like an almost-clear honey, while aromatically it's not unlike a sparkling cider or perry with elements of a both a sweeter dessert white and a slaty riesling.

The finish is dry as you could wish for, preceded by an acidity that’s spritzy and Pét Nat like, while there's little in the way of overt sourness – more a herbaceous, grassy minerality – all of which enhances its vinous credentials despite its nearest brush with wine being the time in ex-wine barriques.