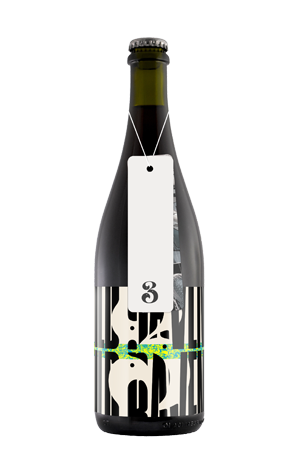 A few years ago, I took esteemed drinks writer Max Allen to 3 Ravens to meet head brewer Brendan O'Sullivan due to their shared fascination with flavour and fermentation. At one point, Brendan pulled a sample of unfinished beer from a barrel to show just how unpleasant things could get when working in beer's wilder realms; he insisted this was a good sign and that a few months down the line the wee beasties at work would turn it into something delicious, but such was the unpleasantness you could see even Max had his doubts.

I'm pretty sure this beer wasn't the one in question, but it certainly seems to have been through a few things. Originally conceived, brewed and put into barrels with Christian Skovdal Andersen of Denmark's Beer Here in 2019, this Raw Ale inspired by the latter's Cascadian dark ale Black Cat became – to use Brendan's words – "offensive" as it took shape. The decision to use a no boil farmhouse technique from Belgium and Denmark – featuring raw grains, aged hops, mixed culture barrel fermentation and extended lees contact – took them on a 30-month "roller-coaster" until the liquid in the five barrels was deemed good enough to be blended and re-fermented.

And where did it end up? Well, it has a potency of aroma that wends its merry way up your nostrils from a distance, and seems to stand with one foot in the world of Rodenbach and oud bruins in terms of appearance, acidity, and fortified malt character yet with another planted somewhere funkier. That's due to Raw Ale presenting with less sweetness and attendant body, lower carbonation and a more pronounced gripping sourness than such beers, all the while laced with dark fruits, tangy plums and lively spices. Certainly, it's no longer offensive, unless your palate doesn't like to wander too far from lagers and pale ales, in which case you'll be in for a shock.