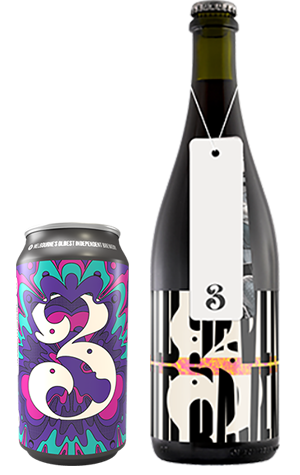 3 Ravens are never ones to shy away from showcasing beer ingredients in quite a unique way and these two releases are excellent examples of how they do that. Fresh Roast Brown Ale is part of the brewery’s new Nevermore series of small-batch, seasonal releases that draw inspiration from Melbourne’s weather. The idea behind the beer comes from 3 Ravens’ fearless head of sales, Geoff Hanson, who loves brown ales and wanted the brewers to fire up their malt kiln to freshly toast some specialty malt for the beer.

Fortunately for the brewing team (and somewhat to Geoff's disappointment), Voyager Craft Malt toast and roast malts to order, so 3 Ravens instead designed a beer based on a mix of those, plus another two from New Zealand's Gladfield. Fresh Roast includes Ella, Hallertau Blanc and Idaho 7 hops, which add a layer of fruitness to the beer’s aroma alongside more biscuity touches and roasted barley. Joining those are caramel, some light touches of chocolate and freshly-popped toast, with a restrained bitterness and hints of espresso.

From a deep brown showcase of malt to one of fresh fruit, Framboise is a mixed culture member of the brewery's long-running Wild Ravens series. Inspired by the fruited lambics of Belgium, in a typically 3 Ravens manner, the brewers turned things up quite a bit, using some 400 grams of raspberries per litre of beer, compared with their more typical 150 to 200g/L.

Those raspberries come from Coffs Harbour and you can tell the beer is packed with the stuff given the quite stunning ruby red colour it pours. Framboise features a blend of dry, bitter and hop-driven beer, including a hoppy lager and a grisette, with the average age of those blends at the time of bottling 19 months. There’s a variety of hops at play too, including six-year-old Mandarina Bavaria, while lavender and curaçao were also included and the beers were aged in neutral French-oak barrels.

If the colour wasn’t enough of a giveaway that what you might be about to drink would be heavy in raspberry, then the aroma certainly is; it's less like opening a punnet of the berries and more akin to poking your head inside a bush full of them just as they're ready to be picked. Upon drinking, the fruit is at first quite sweet but the beer finishes dry, tart, sour and, far from being a pure expression of raspberry, there are also notes of cherry and an earthy funkiness, plus a spritzy carbonation that makes it the kind of beer you'll want to crack as guests arrive for dinner. If you’re willing to share it that is...