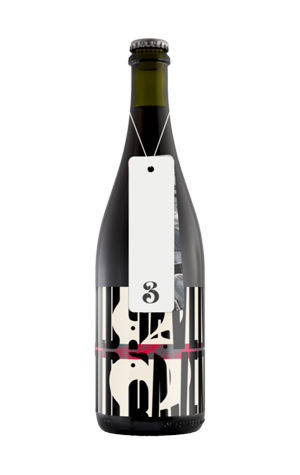 I owe Ravens a bit of an apology when it comes to this beer. When we were celebrating ten years of The Crafty Pint, the plan was to sign off our ten days of features by creating a beery time capsule. We invited readers to suggest items from the beer world of 2020 that we’d gather and place – safely – inside an ex-Starward barrel before filling it with a Flanders red style blend we’d then draw from each year, topping up Solera style, before rescuing the items after ten years of evolution.

Subsequent lockdowns, reopenings, a spot of quarantine, and a lockdown-extended road trip combined to work against us, however. Sure, we gathered and vacuum-sealed most of the items, and I spent time with Ravens' brewers sampling various barrel-aged liquids to decide which would make up the blend for the first iteration to go into said barrel, but we just couldn't get enough of a clear run to get those two elements together with the barrel in the same place at the same time. So, instead, the blend has become part of the Wild Ravens series.

The average age of the various barrel-aged mixed culture beers at bottling was 22 months, with the oldest of those around four-years-old; the intention was to mimic the glorious Flanders reds of Belgium. Between them, the four beers in the mix bring a veritable cavalcade of specialty malts, hops from Australia, Europe and the US, and both brown sugar and ex bourbon barrel oak staves to the party.

Ruddy chestnut in colour, with little in the way of a head, there are aromas of barrel-aged vinegar, cherry cola and red berries mingling with baked fruit pie and a sharply sweet tang. I picked up flashes of both Amaretto and Amaro too, leaving you with a liquid that's as much fortified wine in character as it is Flanders red thanks to its flighty top notes. It's a shame we won't get to see how it develops wrapped around a bunch of random memorabilia in a whisky barrel, but there's always time for that project to be rebooted as things return to something like normality, no?