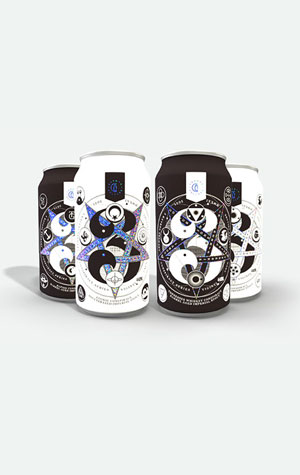 Neither 3 Ravens nor Carwyn Cellars are the sorts to do things by halves, so when they decided to collaborate on a series of imperial stouts you can be sure they didn’t hold back. Inspired by a session tasting rare barrel-aged beers that led to a pact to distil the essence of their favourites into their own releases.

Going by the name The Conspiracy Series – conspiracy is the name for a group of ravens as well as when people get together to plot mischief – two are barrel-aged and two aren’t. Starting with the aren’t, we have Coffee Conspiracy, featuring a Geisha coffee varietal from local roasters Golden Brown added to the beer post fermentation using a method the brewers dubbed the “Coffee Torpedo”. It’s worth noting French oak chips were also in the mix as there’s a creamy stickiness to the texture of an 11 percenter with aromas that are partly like the experience of opening a bag of fresh coffee beans, partly tucking into chocolate-coated beans. A roasted bitterness and dusty dark chocolate play tug of war on the palate to create what my sampling companions variously likened to a “serious iced coffee” and espresso martini.

From coffee to Cookie Conspiracy (11.0%) – a beer whose label, even amid stiff competition, demands extra attention. Team members were reminded of imperial pastry stouts from The Bruery and S’Mores. Conditioned on raspberry purée, Tanzanian cacao nibs, vanilla and raspberry marshmallows as well as several boxes worth of a well-known biscuit, it’s packed with chocolate cookie and vanilla fudge flavour, much in the way of raspberry so sweet it's bordering on cordial in character, and nostalgia for Black Forest gateau.

Tennessee Whisky Conspiracy (9.5%) spent five months in ex-Jack Daniels barrels; even if you didn’t know they were first fill barrels, you’d probably suspect they were given the way the former inhabitant enhances the liquid. We felt it was the most “imperial stout-y” of the quartet, one that’s been genetically injected with the DNA of a flannel-wearing 18-year-old listening to Guns N’ Roses.

Which just leaves BAPIOS Conspiracy (11.5%), the latest chapter in the story of 3 Ravens’ Barrel-Aged Peated Imperial Oatmeal Stout (BAPIOS). Here the barrels once housed rye whisky from locals The Gospel as well as the 18 percent ABV BAPIOS. A little peat smoke melds with a sweet honey bourbon character in a beer that’s both drier than the first imperial stout to make its way through said barrels yet also tar like in texture.

The co-conspirators launched the beers over a breakfast. You may well want to enjoy the foursome with friends rather later in the day. Well, unless you fancy sleeping off much of the remains of the day.