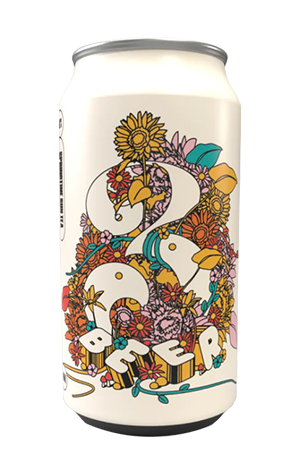 3 Ravens have rather a lot of different ranges within their range, from CAW on the one hand to Nat Rav on the other, and others in between. With Springtime Sun Tea, it feels like something of a crossover episode: it's been slotted into their Nevermore lineup of not-to-be-repeated releases yet is in the character of their Wild Ravens series of blended barrel-aged liquids. And it's also the first such beer from the Thornbury brewers to appear in a can.

In typical Wild Ravens fashion, it's the result of a blend of five different fruit-driven mixed culture beers that were between 16- and 27-months-old when they came together. At that point, ingredients included herbal tea, stone fruit, citrus and fruity hops; the blend was then conditioned on camomile and lavender for good measure.

Given how much is going on, and how palates differ from one person to the next, it would be folly to try to tell you exactly what to expect, but for me there's peaches and white nectarines aplenty, a body and acidity that's got juiciness to spare, a soft, peppery spice, some Belgian-esque funk, and a prominent tannic quench within its dense haze. A battle between fleshy, juicy tanginess and an uber-dry finish with a herbaceousness floating in its midst.