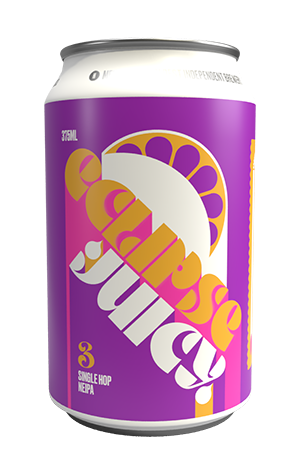 3 Ravens might be a brewery that brews just about every beer style under the sun - and some beers that are barely beer at all - but one thing that's clear is that when it comes to Juicy, it's a series that's always on the mind. In fact, it seems that even when making one Juicy, the plan for the next round of hops on haze is already firing away. Back when they brewed Mandarin Juicy - which used Cascade, Centennial Cryo, Eclipse and Mandarina Bavaria hops plus mandarin zest and juice - the 3 Ravens crew were so impressed with the newest season of Eclipse (which has been used by brewers for some time but only more recently given a name by Hop Products Australia), they knew what their next single hop NEIPA would be.

So that brings us to Eclipse Juicy a triple dry-hopped hazy in a purple can that might use a single hop known for its mandarin hops but nonetheless it doesn’t present a single note. Sure mandarin - the zest of one to be exact - is the most prominent but it’s joined by stone fruit and some pine that join the beer’s smooth and silky body to be a Juicy you may well already know and love.