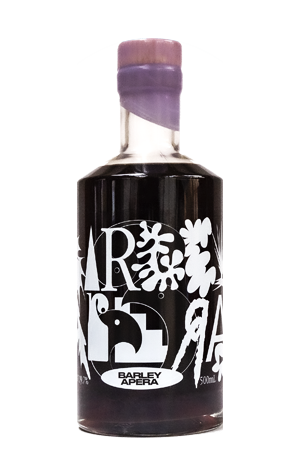 Barley Apera or barely beer? The brewing team at 3 Ravens has long been one of the more experimental, whether in terms of techniques, choice of ingredients, packaging and so on. And here they've thrown another oddity into the mix in the shape of a beer-based version of apera, the name given to sherry in Australia.

If it were a book, its subtitle would be "Fortified barrel-aged and blended barleywine" (as everyone knows the one thing barleywines require is fortification). And it would be one with many chapters, taking in various elements: a strong, aggressively hopped barleywine brewed in 2019; a portion of solera stock ales made up of aged barleywines from 2011, 2017 and 2018; 13 months of ageing in ex-whisky hogsheads; the addition of spirit distilled from kegs of beer no longer required due to COVID-19; a dash of unfermented beer from the 2019 barleywine brew day.

What they've ended up with is an uncarbonated 19.7 percent ABV liquid that looks the part, both inside the bottle and in your snifter, and which to me flits in character between an intensified Belgian strong dark ale – imagine those dark fruit and cake spice aromas and flavours reduced to a jus and you're on the right track – and, as it finishes, something very much in sherry territory, albeit at the drier end.

One of those rare releases, like Boatrocker's beer whisky, to pull out for someone who thinks they've tried everything.