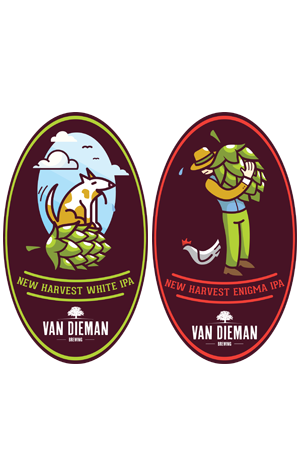 For Tasmania's Van Dieman, brewing one beer to celebrate the recent hop harvest just wasn't enough. He's gone for a pair, each one showcasing different locally grown hops in two very different beers, both of which he's brewed in the past. One is the New Harvest White IPA, a hoppy, spicy pale Belgian style that looks to combine the spicy characters of a witbier with layer upon layer of fresh, fruity hops grown on the farm where he brews his beer. The hops doing the majority of the work on the flavour and aroma front are Cascade and Galaxy, with the latter to the fore. Brewer Will Tatchell says they provide "tropical fruits, bright citrus, resin rich, and spicy / herbal" characters in a beer that's "big and bitter" yet "clean and crisp".

The second beer is a second run out for one of the first beers brewed in Australia to make use of Hop Products Australia's latest release, Enigma. It's the only hop used throughout the brewing of the New Harvest Enigma IPA, offering up "fresh tropical fruit and strong peppery spiciness" and a "smooth, distinct resinous bite". Both beers are keg only.