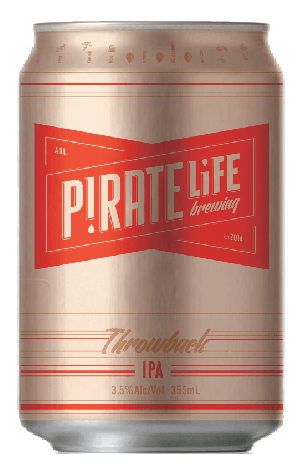 There's been much debate about the term "session IPA" in the beer world. It seems that a lot of people get rather hot and bothered about what it means, whether it has any validity or is just a marketing swizz, and that the cause of humanity would be advanced if the two words were never uttered in unison ever again. Seems to us there are more pressing matters to get worked up about but if we were to just assume that session IPA is here to stay as a descriptor then what should it be?

We'd suggest there's a bloody strong argument for it being the Throwback from Pirate Life. At 3.5 percent ABV it's sessionable. It's hoppy throughout, as a modern IPA should be. And it has a bitterness that leaves you in no doubt you've had a hop driven beer.

Leaving semantics aside, the Throwback can be easily described in three words: hops, hops, hops. Crack open a tin of the honey-coloured ale and you're hit with fruity hops. Pop it in your gob and, guess what: more hops, of the grapefruit, lemon sherbet and oily, resinous kind. And then the bitterness comes sliding in and sticks around admiring the view of your tonsils awhile. Prediction: this beer will kill it.