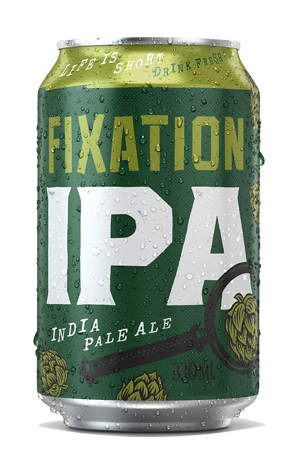 Fixation's Tom Delmont was responsible for taking The Crafty Pint's founder to Mountain Goat shortly after he'd moved to Australia in 2008, so can claim at least partial blame for the slippery slope that led to this site. Since that fateful Friday evening, if there's one thing this long friendship has made more than apparent, it's that Tom loves and appreciates good beer more than pretty much anyone on the planet. Especially when it's an IPA.

When he was still employed at Mountain Goat before their sale to Asahi, he was the first non-brewer to have a beer brewed in his name; The Delmont was, of course, a West Coast IPA. So where do you go after that? How about heading up a company devoted to brewing nothing but IPA?

The first cab off the rank for that company, Fixation, was their flagship IPA, built upon a beer that was already in development at Stone & Wood at the time of Fixation's launch. The aim was to recreate the West Coast USA style IPAs he loves and deliver them fresh to the Australian market. And that's just what they've done, albeit reining in the overt bitterness you can find in many beers of its ilk Stateside and instead delivering heaps of fruity, citrusy hop aroma and flavour with such great balance that you'll easily find yourself going back for more – even at 6.4 percent ABV.

It's gone on to collect a cabinet full of gold medals and helped Fixation to their own major trophies too. And, as of winter 2019, you can now pick it up in cans instead of bottles too.