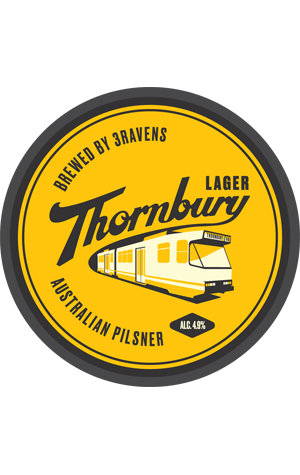 With ten taps to fill at their newly expanded brewery bar, there’s plenty of scope for the 3 Ravens brewers to play around. And one beer that’s become a permanent resident on those taps since the bar was reopened – and is proving popular enough elsewhere to have swiftly graduated to the ranks of year round brew – is the Thornbury Lager.

Based on Northern German pilsners, it’s a beer designed to be drunk rather than dissected. Head brewer Brendan Sullivan selected the Aussie hops he felt were most old school European in nature, the likes of Ella, Summer (a derivative of classic European pilsner hop Saaz) and yet-to-be-formally-named HP-035 and has used them in such a subtle manner that they add little more than soft spice and gentle fruit flavours to a beer that is a credit to those that inspired it: crisply malt led with some subtle lager yeast esters and nothing to have you thinking anything much more than: “Where did that disappear to? Maybe I’ll have another.”

A heads up too: look out for it appearing in cans in the not-too-distant future.