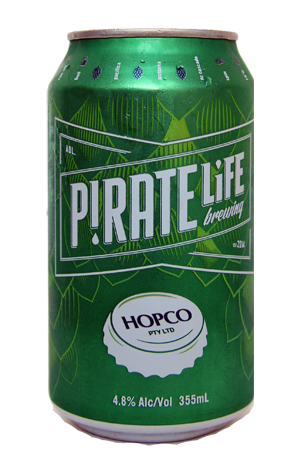 In their short lifetime, Pirate Life has managed to squeeze in a fair few collabs: with venues, with the Hilltop Hoods' record label, with a guy that makes beard oil. But perhaps their smartest is this one with Hopco, the Tasmania-based hop supplier. Why? When the world's brewers are undergoing frequent hop shortages, it can't hurt to have a supplier's name on one of your cans.

The beer itself is one that makes sole use of New Zealand hops: NZ Cascade, Motueka and Pacifica. They combine to create rounded lime aromas atop a soft pale malt base and a bigger-than-expected impact on the palate where a pretty distinctive resinous bitterness that sticks around.