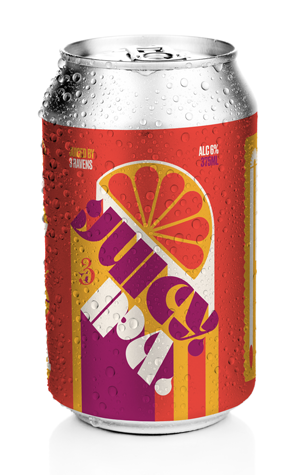 3 Ravens had already put out a couple of quality IPAs in 2016 before poking the bear with their latest. "How?" you ask. Well, you may have heard of a new style of IPA with origins in New England (US, not NSW) that's typically cloudy as, and with juicy hop character very much to the fore. To those who like their beers clear, it must send shivers down the spine to see something so murky in a glass; to many brewers, they're not "good" beers, given they can leave things such as yeast (so hop oils can cling to them) and protein in the beer. But a few people have started playing around with them Down Under – see Ale of a Time's article for more.

The idea got 3 Ravens head brewer Brendan O'Sullivan excited, however, so much so that he timed the release of this Juicy IPA for his birthday. He says that, while he's copped flack from some of his peers for brewing the beer, it's actually been one of the most process heavy beers he's brewed. We won't go into too much detail (mainly as we don't understand half of what he was talking about...) but there's multiple types of hops in there (not varieties – although there's heaps of them in there too – but types of hop) plus triticale (a wheat-rye hybrid) and various other tricks in play too.

The outcome is a beer that's, you've guessed it, hazy to the point of cloudy, looking like a golden/orange breakfast juice and throwing off aromas so juicy there's an almost acidic tinge to them – like a fresh OJ. The aim was to create something akin to lemon, lime and bitters and certainly it's all about big, juicy citrus characters. There's a bitterness that lays down like a blanket on your palate before a tickling, prickly (breakfast juice like?) carbonation gently folds it away. As for the belch test: it's like you've just eaten a juicy hop cone fresh from the bine at harvest time.

Also, did we mention it's juicy?

UPDATE: A revised version of this beer has been a regular release available nationwide in cans since June 2017