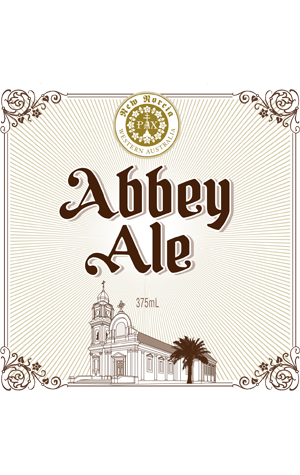 Mash head brewer Charlie reckons this New Norcia is the perfect morning beer. Given its high alcohol content, carrying out quality control checks beer before most people have tucked into their corn flakes may lead to a boozy form of enlightenment but the pride and monastic reverence he shows when describing Abbey Ale speaks volumes about Mash’s inheriting of the Benedictine Belgian style pale ale.

Abbey Ale was previously brewed by Malt Shovel Brewing (Lion) in Sydney, being one of the brewer's rarer and lesser known brews. However, this new relationship with the Swan Valley brewery means it's being brewed a lot closer to Australia’s only monastic town, from whence it takes its name.

Under Mash guidance, the New Norcia Abbey Ale has received some subtle tweaks, but these haven’t dampened the banana, bubblegum and spice on the nose that come with a suitably restrained bitterness.

Abbey Ale is available from the New Norcia Hotel two hours north east of Perth and will be a canned release from late January 2017.