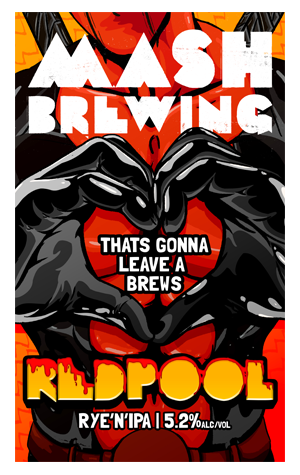 Fresh out of the Swan Valley comes another pop culture-inspired Mash Brewing beer, the Redpool RYE’N’IPA. Marvel fans will quickly note the references to the Deadpool character played by Ryan Reynolds. If you missed them, there's a few more puns to be found on the can – “That’s gonna leave a brews” among them. The brewers reportedly had Shoop by Salt n Pepa on repeat throughout the entire brew too, because that's what Mr Pool would do.

But, as with all things beer, it's what’s inside the packaging that counts. In this case, it's a rye IPA with dank, tropical fruit aromas. The rye malt adds tangy/spicy characters, which work well to balance the sweetness. Ekuanot, Centennial and Idaho #7 hops showcase citrus and tropical fruits, before leading into a dry and moreish finish in a beer designed, presumably, for consumption after exerting Maximum Effort.