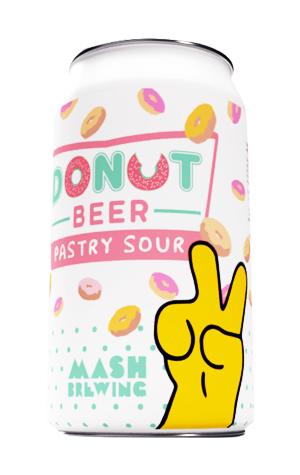 Mash Brewing have teamed up once again with their good mates at Donut Waste and Oz Harvest to create Donut Beer 2.0, and this time around they've created a pastry sour with a malt bill made up almost entirely of doughnuts.

For a bit of background, Donut Waste is a Perth-based waste and sustainability startup on a mission to help the community become more circular in its waste management. In this case, they've saved more than 2,000 doughnuts from landfill, while they also recycle coffee grounds and plastic can holders. The partnership with Oz Harvest sees 50 cents from every can sold going towards feeding those in need: one can = one meal. So, by drinking this tasty beverage, you're doing good.

As for the beer, with doughnuts making up so much of the malt bill – the brewers took on board lessons from the first brew and spent four hours breaking them down so they didn't float – you can expect subtle doughy aromas and even some hints reminiscent of flavoured toppings coming through – think tropical fruit, vanilla and strawberry. While they still had to deal with some stuck sparges along the way, 24 hours of souring in tank before the yeast was pitched gave them a beer they were happy with: the sourness is nicely balanced and adds a bit of tang to the finish.

Head brewer Adrian Godwin told The Crafty Pint: "People might say its not doughnutty enough but it was never about creating that profile. It was more about how we can use recovered food waste and make a clean drinkable beer from it which I think we have achieved successfully, and I hope it encourages others to see what they can achieve."

It's a grand, as well as fun, endeavour so donut walk, run, to get your hands on this clean-drinking pastry sour!

Launching on September 1, when Mash will pick the winner in a competition to guess how many doughnuts were used in the beer.