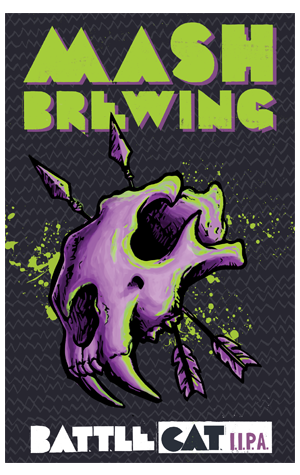 Mash have released Battle Cat in cans for the first time. This big cat was brewed with bold and brash tropical flavours in mind, leading the brewers to get their hands on some experimental hops from NZ (going by the name NZH-107 for now) which brewer Lachlan Kirkwood reckons bring “tropical and lime vibes”. Joining them were Amarillo and Centennial – featuring heavily in the whirlpool – plus multiple dry-hop additions of Azacca Cryo hops, NZH-107 and more Amarillo. in short, this is one heavily hopped IIPA.

So how does it taste? Well, as you'd expect, there's plenty of tropical fruit coming through with passionfruit and candied orange at the front followed by dank citrus. The malt profile is sweet and balances well with the beer's punchy bitterness. The sabretooth artwork on the can was created by a local WA artist, the name might bring back memories of the epic battles between He-Man and Skeletor as the former rode in on his trusty steed Battle Cat, and the 8 percent ABV may well catch you out if you're not careful.