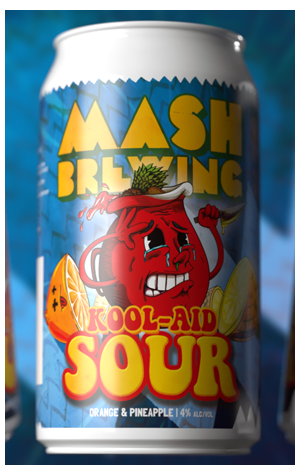 Mash have you covered for the final weeks of warmer weather with their Kool-Aid Sour. The brewers had the unenviable task of peeling and blending multiple kilos of fruit to be added to the boil with more purée added during secondary ferment to bring out more fresh fruit flavours.

Pineapple flavours come through initially with orange following, while the light wheat base softens the beer and allows the fruit to zing. The plan is to up the amount of orange and pineapple in the next batch for an even fruiter hit but even as is it's a beer to keep you cool and refreshed at the same time.

Indeed, their efforts have led to what's a very approachable sour, one that could easily persuade someone who's not normally into such beers to take the plunge. Just drink the Kool-Aid, man!

In limited release from both Mash Brewing venues
And in leading liquor stores in and around Perth.