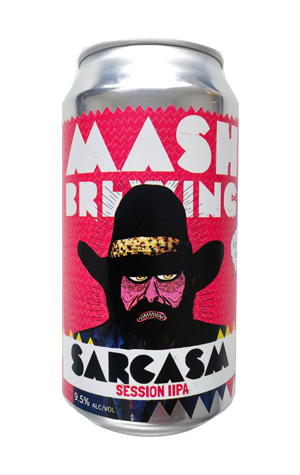 Some may consider that trolling the beer industry and, perhaps, punters may not be the wisest choice when it comes to choosing beer names, yet it’s a decision that’s served Mash Brewing well over the four years’ worth of Sarcasm releases. Even now, the online excitement for the beer’s arrival continues unabated in an increasingly competitive market – maybe trolling early is the key?

As 2019 warms up, it's been made available in limited can release, and the double IPA has lost none of its original character under the stewardship of new head brewer Brad Nolen. The caramelised orange colour in the glass is a fair indication of the toffee characters that follow, although this iteration shows greater balance and flavour clarity than recent releases. That said, it is a sweeter double IPA than many, but if the Crafty Pint IPA blind tastings at Sydney Beer Week late last year proved anything, it’s that there's plenty of drinkers with a sweet tooth when it comes to big beers. Completing the picture is citrus, along with piney resin in a supporting role, which runs through to a dry finish as Sarcasm's boozy warmth builds.

Available in limited release from the brewery and WA retailers