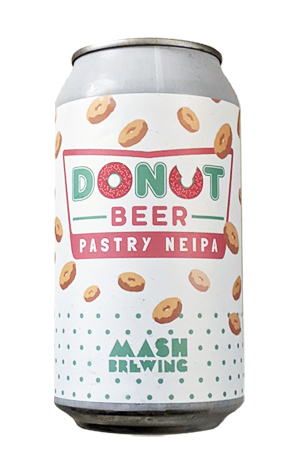 Typically, beer is made from milled grain mashed in hot water before hops are added, some while the liquid is hot, some later when things are cooler, along with yeast and other stuff if you’re feeling creative.

Many fermented products follow the same path to deliciousness, and that includes donuts. Water, milled grains, yeast and some resting lead to sprinkled, glazed and cinnamon sugared hoops.

So, beer and donuts are practically cousins, right? Umm… sort of. For Mash and local food waste endeavour Donut Waste, this spot of collaborative harmony features two tonnes of unsaleable donuts used as adjuncts – in a manner that relates to the comment above about "being creative".

Donuts, fancy or not, appear here more as concept than drowning in dough. Instead, the hazy IPA they've helped created runs soft and a touch sweet, with cinnamon hints and a wisp of fresh orange zest freshness mingling, waiting for attention.

If it sounds like your thing, given the fervour surround its limited release, if you want to try some I'd suggest you run, donut walk.

Cellarbrations at The Market Place Ballajura

And other WA stockists TBC