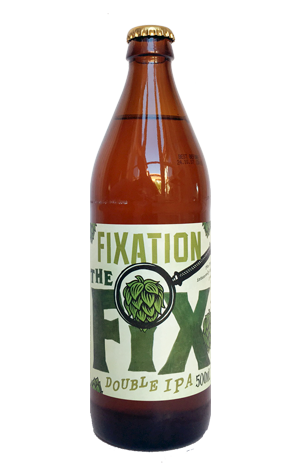 It was while hosting a hop masterclass featuring various brewers, hop growers and sellers that we heard a panellist get straight to the point as to why American style IPAs have become so popular – and continue to grow in popularity. It's a pretty simple theory and one with which it's hard to argue: when done well and consumed fresh they're great beers that deliver a huge amount of drinking pleasure. Sure, we get loads of good beers of all shapes and sizes coming through Crafty Towers but (in part down to Mrs Pint, it has to be said) it's the good hop forward pales and IPAs that survive the shortest period.

Of course, aside from their undeniable appeal, they should disappear fastest – as the label of the first bottled batch of Fixation's double IPA says: "Life Is Short – Drink Fresh". The IPA only brewing company has made part of its mantra the desire to get its beers as fresh as possible to customers and the rewards are easy to judge: the flagship IPA is highly rated by everyone we know.

For big sibling The Fix, they've not attempted anything crazy or out there; you'll have had plenty of hoppy beers featuring Mosaic, Simcoe and Citra before. What they have done is use them bloody well within a beer that's lean without sacrificing hop character. It's there from the pungent aroma that flits from citrusy to candied to piney, through the layer upon layer of hop flavour to the bitterness that builds over time but isn't overpowering. It's 8 percent ABV plus yet there's not even a hint of boozy heat.

tl;dr If you love hoppy beers, clear a space in your fridge for a few of these – they won't take up room for long.

And other good beer outlets in SA, VIC, NSW & QLD