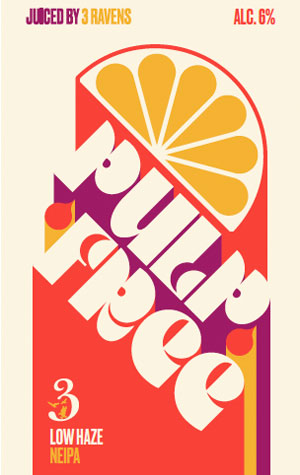 The fun with IPAs continues apace at 3 Ravens. Having won many fans with its Juicy IPA, a take on the haze craze that's rapidly become the brewery's most popular beer, it's been working on a couple of variations on the theme. One is a bigger, boozier number that's still in tank; the other is this: Pulp Free, essentially a de-hazed version of the beer.

It features the same hops, the same protein-rich grains and yeast strain with the specific enzymes capable of making the hops so juicy, but has had much of the haze-forming compounds removed. So, while some aspects remain pretty much unchanged – there's a similar, citrusy outcome aroma wise and a bitterness that's barely noticeable – there's differences too. For example, Pulp Free has a more straightforward, less textural feel as it passes over your palate, making for an easy-drinking, yet still 6 percent ABV, almost haze-free, fruity quaffer the brewers reckon is like a Fruit Cup "but with less sugar and more hops".

And other select good beer venues