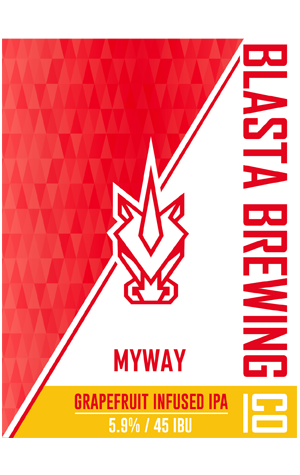 Perhaps Blasta’s most recognisable beer outside of the brewery and the beer that cemented Steven Russell on a path to opening his brewery, Myway IPA could almost be viewed as a statement of intent. The American style IPA is infused with ruby grapefruit and blood orange sourced from Chittering in the Perth Hills and ably delivers a punchy citrus hit atop caramel malts that leave some sweetness beneath the bitter finish.

The citrus additions almost make Myway cost prohibitive – there’s 400 kilograms per 3,000 litre batch – but that’s almost the point; as Steven notes: “Everyone’s has an opinion but stick to your guns. I knew what we brewed was good and, while it may not be perfect by BJCP style, this how we are going to do our beers.”

In Blasta's very earliest days, he sent a few kegs to Melbourne, one of which ended up at The Terminus for an IPA Face-Off, up against IPAs from nine other Aussie brewers. It came top in the public vote, suggesting his way is a good way.