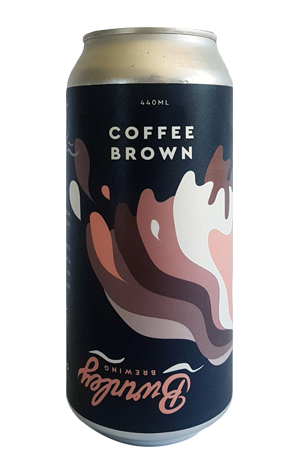 Burnley Brewing’s Coffee Brown cans may have been released as the brewery celebrated its first birthday but the beer has been a part of the operation since the very beginning. Eager to make a beer that was distinctly “Melbourne”, head brewer Michael Stanzel asked one of Burnley’s owners, Phil Gijsbers - who also happens to own These Days Coffee Roastery - to score him some beans. The benefit of Phil owning both a roastery and a brewery goes beyond the presumed discount when trading between the two businesses, but also meant Phil was able to roast the beans to make them work in a beer the way Michael wanted.

The resulting beer is one that uses batch brewed Yirgacheffe and, though those beans do add some roasted notes to the beer, it’s largely fruitier berry and currant notes that sit up against the brown ale’s rich body. The beer’s transition from a brewpub tap to nitro cans was one a longtime in the making, since Michael had long believed it was the kind of beer most suited to such treatment. He was likely onto something since the brown ale’s richness combined with the fine bubbles from the nitro create one creamy and rather luscious beer.

Understandably, since nitro cans are still quite a rarity in the Australian beer world, if you’re not sure how best to pour a can of Coffee Brown, Burnley’s upside-down logo and the instructions on top of each can are a good place to start.