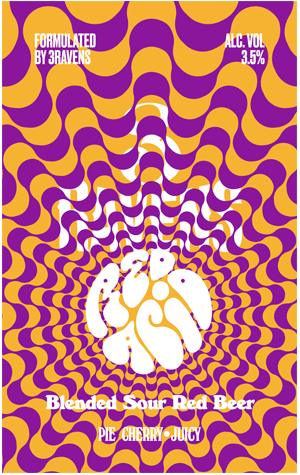 3 Ravens Acid is their mid-strength sour ale, one that, as is the Thornbury brewers' wont, is a springboard for other variations. The third release in the series is Red Acid and, given it's a short run beer weighing in at a mere 3.5 percent ABV, you'd think they wouldn't spend too much time or effort turning it red. But if you think that you're forgetting who you're dealing with...

We'll try to keep this brief, but essentially what's at play here is a quickly soured base red ale that was infused with American oak staves. It was then blended with another ruby-coloured ale that's spent 15 months in old French oak wine barrels with their house mixed culture. And it was blended with a house-made, whisky barrel-aged malt vinegar. Add in German Huell Melon hops and an English ale yeast and you've got the finished beer.

There's heaps going on as a result: berries, dark sugar, pie crust, sweet acetic acid, drying oak, old malt, a cleansing lightness and on and on. Alternatively, you could imagine a session Rodenbach and you're on the right track.