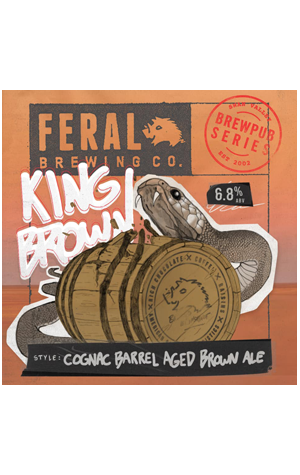 In amongst a wave of Biggie Juice iterations and a riff on a Japanese whisky High Ball, Feral have released a Cognac barrel-aged brown ale that deserves more attention than it’s likely to get. The original 2011 release (the first keg of which was tapped at The Crafty Pint's first birthday, trivia fans) was rated by both former owner Brendan Varis and innovation brewer Will Irving as one on the top five Feral releases ever, so perhaps it’s worth looking behind the wave of haze and hype.

"Solid", "dependable" and, if we’re being honest, "beige" can spring to mind when considering brown ales, yet King Brown’s eight month hibernation in Cognac barrels have treated this beauty with a loving embrace that now shines as both inviting and deeply complex. It’s proof that not every barrel-aged beer need be sour or come with double digit booze; in fact, considering this as a mid-strength barleywine is worthy reference point.

Dirty mission brown in the glass, the lack of visual appeal is soon silenced by smooth layers of caramel, toffee, raisin, vanilla and chocolate, while an integrated but lengthy stave presence and spirit influence shine with cohesion and elegant balance. It’s a worthy re-up and one that would benefit from a wider release. For now, though, Swan Valley patrons are well advised to seek this King Brown while it lasts.

From the Swan Valley brewpub