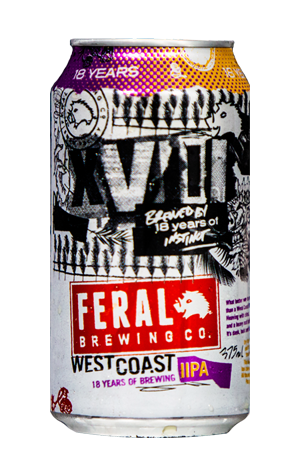 Feral celebrate eighteen years of brewing the only way they know how: with a massive IPA that invites you to knock back a four-pack – even though you know this is probably a really bad idea. In order words, pretty much like many an eighteenth birthday party.

As the first Feral beer designed by the entire brew team – and one which features Strata, Ekuanot and HPA-016, all hop varieties not normally associated with the brewery – West Coast IIPA could have moved stylistically away from its historical links; the moment the citrus, pine and passionfruit aromas hit, you know this is signature Feral in action. If anything, you can almost trace direct links to War Hog and Hop Hog, carried along by integrated yet present booze, punchy bitterness and supportive dankness towards a moreish, dry coda.

It’s a gleeful celebration of where Feral has been – much of which is celebrated on the detailed Dipesh Prasad can art – and where it’s going, just be careful how many cans you have at the party.

You can read more about Feral at eighteen here. And members of our beer club, The Crafty Cabal, can try to win one of three packs featuring a cube of the limited release beer, a tee and a stubby holder. Competition closes November 18, 2020.

Launched Oct 23 at besk and the Swan Valley brewpub