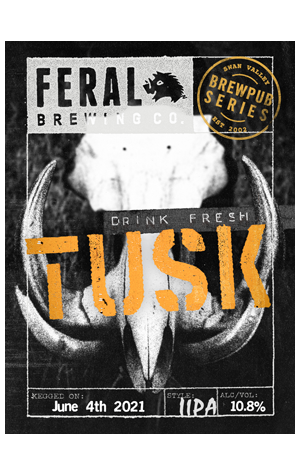 Tusk holds the title of Australia’s first IIPA / DIPA / imperial IPA / really big hoppy beer, one that – back in the early ‘aughts – wasn’t even dry-hopped because no one knew what DH, DDH, TDH – insert consonant-based acronym multiplier – was. Just imagine the palate-punching glee of all hot side hop extraction...

Well, things have changed a bit, as has Tusk. Spoiler alert: it’s not clear.

The 2010s saw the beer's aggressively-hopped, bi-annual, draught-only release turned into cold chain publicity: keep cold, drink fresh – a fight for the care of liquid, something which the rise of hazies has made even more salient. So, if high ABV and charming churlishness on a quality mission was Tusk's jam then, what’s its relevance in a new epoch? Feral answers with Yakima Chief’s new Cryo Pop™, with the airfreighted blend dumped into the Bassendean stainless just over a week from leaving Washington state, making this just the second commercial release in Oz to feature the blend after One Drop.

So, vale classic Tusk, because if peach, apricot and guava bubblegum is a thing, then this would be its beer equivalent. Yakima Chief also suggest strawberry, pineapple, OJ and more, but there’s likely to be a lot of drinks concluding: "I can’t quite put my finger on it, so let’s say juice." More acutely, imagine being inside a tropical Starburst, sans banana.

But whatever this year’s Tusk is, the celebration is always the room, being at a crowded pub, hugging strangers – now new mates, yelling, just yelling, and a wonky dance of fetch another glass. And, if you’re lucky enough to do that, then raise a horn to the cloistered.