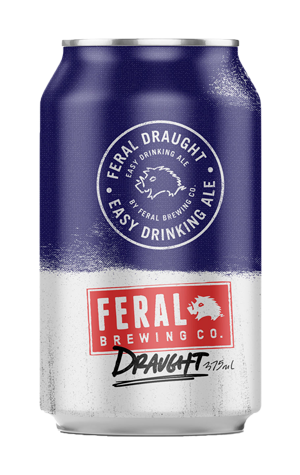 For a brewery that's done as much as any on the local scene when pushing the lupulin threshold of both Australian drinkers and the market, Feral Draught may come as a surprise to some. Described as an "easy drinking ale", this entry level beer is designed for inclusive, everyday drinking.

It's all Aussie when it comes to the malt and hops, with a light dry-hopping of Vic Secret – not that many will be playing too much attention given the comments from tasters on the rigorous, 750 kilometre road test The Crafty Pint team undertook with the beer. "It’s a beer for everybody." "It’s the kind of beer to make wizard swords with." "Easy, fridge filler." And "Crusher" were but a few.

With that in mind, a light tropical character wisps above the slight body and bitterness, keeping complexity to a minimum and modern, session-minded enjoyment to the fore.