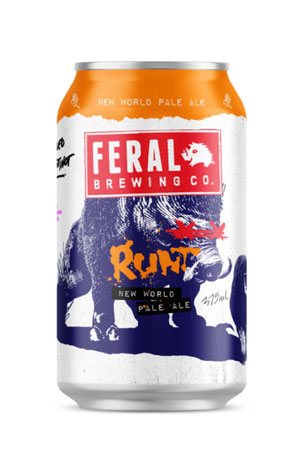 Although it appears here in a shiny new can, Runt’s history stretches back a decade when it first appeared as a 4.7 percent ABV riff on Feral's then brewery flagship, Hop Hog. Despite collecting some accolades along the way, it’s since been in and out of the Swan Valley brewery's lineup, often appearing as a draught-only offering, a legacy which, perhaps unintentionally, aptly reflects its name.

Well, that’s about to change because in mid-2021 Feral welcomed Runt to their core litter, now as a New World Pale Ale. "New World?" you say. Yep, Strata and Sabro hops cover those credentials with tropical passionfruit and mango, supported by peachy stone fruit, in a beer which is far more welcoming than its outsider tag may suggest.