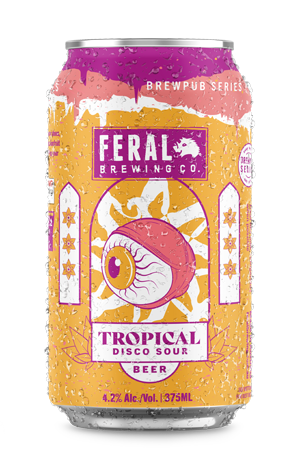 Having released one of the earliest sours in Australia to really go off, in the shape of Watermelon Warhead back at the turn of the 20Teens, Feral are no strangers to the puckering side of beer. Indeed, they'd been playing with wild ferments and other funky blends at their brewpub long before that too. Nor is Tropical Disco Sour a new beer, either, as it’s sashayed in and out of venues, draught-only, for the past few years. But it’s this literally eye-catching can which will likely cement lower pH fare in the minds of Feral drinkers.

Imbibed with just enough Australian mango, passionfruit and guava purée to feel fruity yet not overly weighty, it possesses a minerality that in partnership with Philly Sour yeast’s tart contribution takes aim for maximum refreshment. There’s even a curated disco party playlist available to set the mood via a QR code on the cans. In the meantime, sun's out, let's disco.

WIN! This is a WA-only release BUT we've got our hands on FIVE cases for members of our beer club, The Crafty Cabal. Sign in or sign up here for your chance to win one.

Then across WA from Jan 17