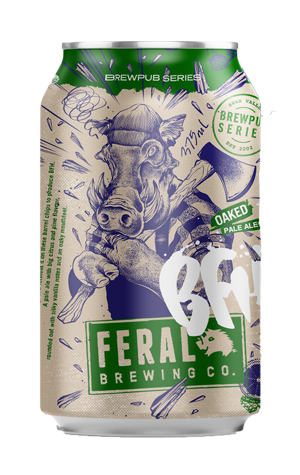 BFH is an Old Money beer but for many this will be a new Feral release, seemingly perfectly positioned for the zeitgeist. In cans? Check! Cool label? Check! French oak fermented? Check! Milkshake IPA vibes? Check! But without any lactose – I checked.

BFH almost centres a marketing Venn diagram of what’s hot right now, yet the reality is that innovation brewer Will Irving has been making it at the Swan Valley brewpub since 2011. BFH is Old Money, but it won’t be for long.

Originally, BFH was barrel fermented Hop Hog; over time, however, individual staves were chipped for a more consistent approach – there’s currently a cooper in the south of France misting up at the thought. Scaling up to full production size represents one of Australia’s largest ever oaked beer releases by volume, and the influence of the wood is unmistakable.

Vanilla cream, vanilla panna cotta and vanilla creaming soda – basically, a lot of vanilla, and creamy things – replaces the familiar Hop Hog aromas, with wisps of passionfruity tropical and citrusy notes underneath. And, while the French oak influence may seem, well, vanilla, it's also rounded the Hop Hog base into a lusciously creamy pale, through which drying oak tannins weave with the bitterness through the final third.

A spot of BFH history for fact fans (and responding to one forthright comment on Feral's socials...). When Feral founder Brendan Varis first brewed this beer, he put the liquid into barrels and figured it would need around a month to take on the oak character. He soon learned how delicate beer was compared to wine, however; before it reached the month, they took a sample and said it was akin to licking splinters. Much to their surprise it took far, far less time for the beer to develop its wonderful creaminess – now just 24 hours – Editor.

Heading nationwide from Feb 7, 2020, in limited