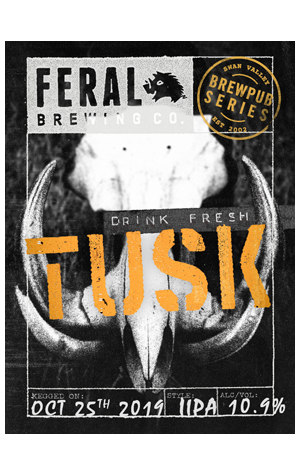 Tusk started life as Australia’s first double IPA, way back in 2003: brash, arrogant and without a dry hop regime in sight, because no one knew what DH or DDH was at the time, but that wasn’t the point. The OG was just big, malty and bitter; a creative endeavour to push things further. A decade later, it was resurrected with a tighter focus: quality.

After pouring cooked imported IPAs into a potted ficus at the Swan Valley brewpub, former Feral owner Brendan Varis and innovation brewer Will Irving’s frustration with poor quality was galvanized into creating a massive hoppy beer that was also fresh. The notion seems almost quaint now, with brewpubs in most major cities, country towns and hamlets regularly pouring fresh beer while massive locally-brewed hop bombs drop weekly and beer events celebrating air-freighted beers land often too. However, earlier this decade Tusk was one of the beers that was instrumental in starting a conversation about cold storage and freight as much as it was about pushing lupulin thresholds.

By now, even the most jaded Australian beer geek would admit to having taken the day off or traipsed further than they needed to try Tusk at some point, such has been this beer’s pull. As Tusk returns for the final time this decade, it's with an edition that dials into the legacy of a big, boozy imperial IPA that’s closer to its classic 2012-14 relatives than more recent expressions.

As Will says: “I just took it back to basics and stopped overthinking it.”

Clearly, brewing a much-anticipated beer once or twice a year has its challenges, not least trying to stuff 50 kilos of hops into 3,000 litres of beer, which this time included Simcoe hop extract, Mosaic and Simcoe lupulin powder, Citra, Galaxy, Vic Secret, Centennial and, for good measure, more Simcoe. Apparently, that’s back to basics!

Now brewed once a year, Tusk 2019 resembles a big, old school West Coast IPA filled with orange marmalade, pine, booze-derived spice, lengthy yet balanced bitterness and a dry finish. It would almost be a nostalgia trip if it wasn’t for the high alcohol-driven pineapple notes and pan-tropical touches.