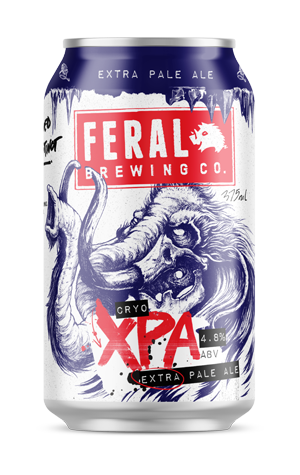 With a career built, first and foremost, upon on hop forward expressions, Feral’s spring 2022 addition to their year-round lineup sees the WA brewers charting a more sociable path than they've often done in that space. That said, they've done so with the exclusive use of Cryo hops, which represent a super-condensed version of lupulin – the good stuff in hop flowers that gives beer much of its character. Hop innovation here centres around flavour, which takes the lead over an assault of bitterness-bringing IBUs or a juicy monsoon.

Pouring misty yellow, pineapple, guava, and general tropical vibes align with soft bitterness, making Cryo XPA one of Feral’s more refreshing beers. Indeed, the XPA handle is reflective of the state of play in Australian beer, and sees the beer slotting neatly into their core range between Runt and the iconic Hop Hog, a beer which casts a long shadow and, for a time, was the nation's most celebrated among craft beer drinkers.

Fans might take a hint from graphic designer Peche’s frosty woolly mammoth on the can – a rare sidestep away from swine motifs – that this is best served from an esky.?