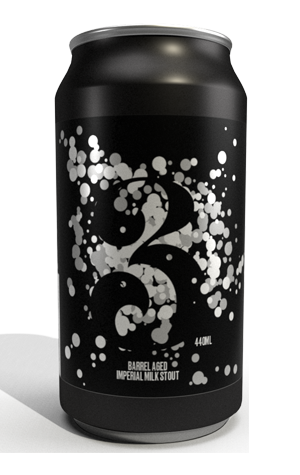 When is a milk stout not a milk stout? When Brendan at 3 Ravens and Matt at Brouhaha decide to take it places...

This beer started out as the latter's tasty but rather straightforward milk stout and put it through a process that makes Gary's transmogrification in Team America look like a mere spot of blusher and a couple of blobs of cotton wool. The process, to give it its technical term, was “reiterated mashing” – taking the first runnings from a very thick mash, using them as the brewing liquor for a second, equally thick mash, then using the second runnings from the first mash to sparge the second mash, then added brewing sugars to the kettle until the wort was so thick they couldn’t measure it.

If you've no idea what that means, they essentially did everything they could to turn the dark, sugary liquid they wanted to ferment into beer into an insanely dense meal for the yeasty beasties. On that front, a fruity English yeast was followed by a special alcohol tolerant yeast in order to get the job done. Except it wasn't done as they then aged it for six months in a blend of ex-red wine French Oak barrique and American Oak hogshead whisky barrels – the longest 3 Ravens have aged a "clean" beer in oak.

By the end of this, the milk stout had become a 14.2 percent ABV imperial milk stout. It's actually leaner on the palate than the above would suggest (well, everything's relative), but don't get thinking that means it lacks depth or punch. A dark mass of chocolate, dark caramel, dark fruits, creamy vanillin oak character, coffee and warming booze are all at play in what's a genuine beast of a beer.