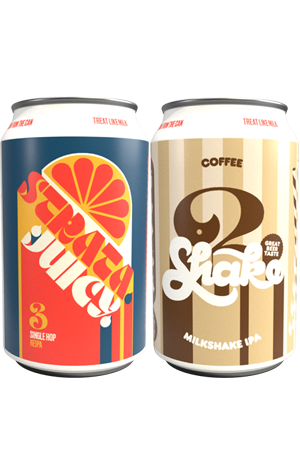 Before they knew they were the Indies 2019 Champion Small/Medium Brewery, the 3 Ravens brewers were finding favour with their peers at BrewCon, the Independent Brewers Association's annual conference. Hop suppliers use it as an occasion to show off new varieties alongside those experimental crops that may become commercial at some point. The showcasing typically takes place by sharing hops with Aussie brewers and asking them to come up with a new beer. Here, there were beers in which the hops mimicked barrel-ageing qualities, those with noble hop characters suited to lagers, but mostly a heap that deliver on the big and fruity front.

Among the last of these is Strata, a variety developed at the Oregon State Aroma Hop Breeding Program that appeared to be in more conference attendees' hands than other beers on offer. It's the star of 3 Ravens' 47th Juicy IPA variant, one that stands apart from most of its predecessors, not least in lacking much in the way of haze, instead looking more like an unfiltered pilsner. It's a long way from such a beer in every other way, though, with aromas that take in sweet pineapple, just-squeezed juicy orange, hints of bubblegum and freshly harvested bud. It's pretty sweet to taste, what with all that fruitiness, yet also finishes in what is perhaps best described as riesling territory, with that wine grape character clipping the edge of the sweetness in place of bitterness.

Also new from the Thornbury brewery is Coffee Shake, another entry in their Shake series debuted at last month's Perth Craft Beer Festival. Having taken the series a little leaner and drier with the past couple, this moves back into fatter, sweeter territory, with creamy aromas embellished by vanilla and lactose reminiscent of iced coffee but also possessing something of the rich fruits you find in a traditional malty English ales; Coffee Shake shares such beers' appearance too. There's citrusy hops riding atop proceedings and a touch of hop bitterness, yet it remains pretty dessert like.

PS If that's not enough, you might still find some Enigma Juicy doing the rounds. Exploding with punchy melon, passionfruit and dank hops, it's up there with the very best they've released to date – if not the best.