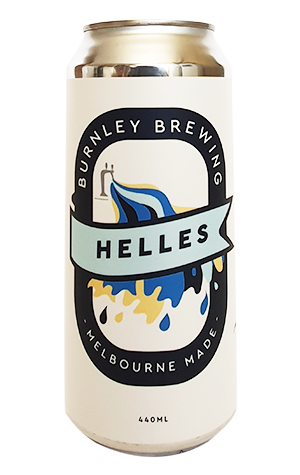 When you return from a holiday that includes some of Europe’s top beer destinations, there’s a few beer styles you really want to sink your teeth into and, largely, it’s those packed with New World hops. But with Burnley Brewing about to launch into their month-long Oktoberfest celebrations, it turns out this beer writer’s first beery writings are instead on a style far closer to those enjoyed during the long hot last days of Germany’s summer. Helles is the Melbourne brewery’s recreation of a style built for drinking in the Bavarian sun; inspired by head brewer Michael Stanzel’s time drinking in that sun in between days spent learning to brew.

The springtime limited release cans invoke the light blue and white of Bavaria and the beer, lagered for five weeks, is as about as close a homage of Bavaria’s pale lagers as you'll come across. Pouring with the lightest of golden bodies, there’s a soft grainy sweetness from the malts and a hint of sulphur in what’s otherwise a very clean and crisp beer. There’s the slightest of spice from the noble hop combination of Hallertau Tradition and Saaz and a soft bitterness to bring together a beer best enjoyed in a beer garden, even if those in Munich are many miles away and your holiday is fast becoming a fleeting memory.

It's a beer that proved too popular just to be brewed for spring too, with the team deciding to add it to the core range midway through 2020.