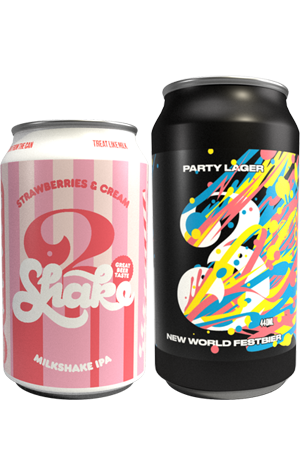 "Treat like milk" it says around the rim of the can. And, in the case of this Shake release from 3 Ravens, it looks like it deserves a spot next to the previous Coffee Shake in the milk fridge too. That said, it does say "beer" a couple of times on the label: "Great Beer Taste" front and centre and a Simpsons reference on the side we'll leave you to discover for yourself.

As for the liquid inside Strawberries & Cream, it's going to elicit the same love it / hate it response milkshake IPAs for which seem designed. Given I'm rather fond of creamy strawberry milkshakes and ice cream, I can get down with it more than some, yet the characters – particularly on the nose – that remind this expat Brit of Frijj yoghurt drinks and Luca's ice cream wafers from Musselburgh will turn away just as many. Hazy deep copper, the strawberry comes across like jus or cordial, softened by vanilla and lactose. The beeriness is more to the fore to taste; it's still got that sweet, fruity stickiness, but there are sharper, fruity hops and enough bitterness to offer at least a pretence at balance.

Leaving the brewery at the same time are cans of Party Lager. Despite the name, this is a far more "normal" beer, a festbier-inspired released timed for Oktoberfest, thus a little higher in booze than your typical Euro lager. A bright copper colour, there's nothing too demonstrative about it: soft spicy and herbal aromas, with the faintest touch of pine appearing over time (evidence you can use New World hops such as Galaxy and Vic Secret earlier in the brewing process to elicit something other than fragrant tropical fruits). On the palate, there's toasted malt flavours and an earthy, perfumed honey like character too, not to mention a broad, back palate bitterness.

Taken together, they're a pretty good snapshot of just how far the concept of beer has been stretched over the past couple of decades.