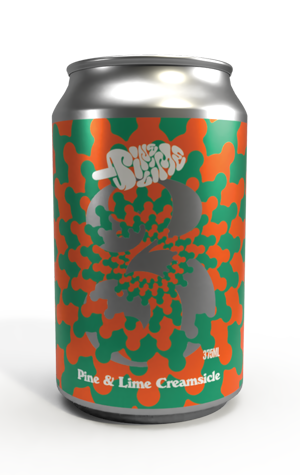 During 2018, 3 Ravens released a series of Acid Test beers – draught only spins on their Acid sour designed to test the water for future releases. And, as we approach summer 2019, one of those Tests – the Pine & Lime Creamsicle – has returned in cans.

It's not the first beer borne of such inspiration to have come from a Melbourne brewery; Moon Dog, who now have a second brewery taking shape mere minutes from 3 Ravens, have been releasing their Splice Of Heaven IPA for a number of years now. The Creamsicle is a rather different affair, however, despite the similarities: more icy pole than the Splice Of Heaven's twin scoop in a waffle cone.

Being a 3 Ravens beer, plenty has gone into creating what is, at heart, a refreshing mid-strength, not least rolled wheat (for body), pineapple juice, lime zest, vanilla, lactose and French oak chips. The result is a lively, lime led fruity aroma, albeit one that's distinctly creamy and sweet too and begs the question (in my head, at least): "Where does the vanilla end and the oak begin?" Take a swig and you'll find it leaner and more refreshing than the aroma might suggest, with those citrus flavours leading the way and the beer's creamier side kept in the background.

It's fun, well constructed and destined to find its way into many an Esky over the coming months.