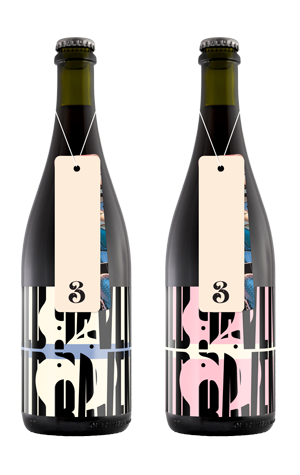 The Wild Ravens series has been kicking around the Thornbury brewery for a few years now, but is back as the decade nears its denouement with a new look and a seemingly even broader palette with which the brewers can create. Methode Ravens is their "homage to the great lambic blenders of Belgium" – a blend of liquids with an average age of 22 months and, arguably, the purest expression of the Wild Ravens ethos.

Built upon a base beer of a wild ale from 2017 that was the brewers' favourite barrel at the time, one they were so fond of they "couldn’t bring [themselves] to adulterate with fruit or other adjuncts". From the apricot aromas that hit first through the funkier, cheesy, savoury elements that follow, and a mouthfeel that manages to be soft, rounded and smooth despite the zesty, acidic side of the beer, right through the flashes of sweetness to the stonefruit / peach flavours that settle in on the palate, it's best left as is.

As for Strawberry & Rhubarb, why, it's in danger of rehabilitating the word "pastry" in the context of beer. Featuring a high proportion of rye and fermented in ex-whisky barrels with Tivoli Bakery's rye leaven, it's a follow up of sorts to the pair's delicious Sourdough Ale. After nine months of maturation, the brewers tell us the beer had developed a decidedly almond croissant like flavour, which led them to try to create a series of pastry sours.

For this one, Matt Jancauskas from Brouhaha flew down to cook up a dark rhubarb syrup, which was added along with strawberry puree for refermentation prior to packaging. Again, there's plenty going on, as you'd imagine, including hints of the whisky and oak, plenty of rich, toasted malts and, of course, berries and dark fruit aplenty. And, while it could be the power of suggestion, take a whiff with eyes closed and you could start to think you've got a fruit pastry rather than beer in your hand, after all.

Plus a small amount of the pastry went to WA stockists