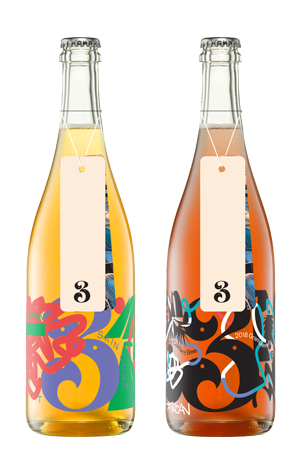 The brewers at 3 Ravens love pretty much all booze that's interesting, not to mention anything fermented. But they're particularly fond of natural wines and have been working on developing a line of beers of that ilk. After a lengthy gestation and a few small batch trials, the Nat Rav series made its official debut late in 2019, complete with bottles that aren't just decorated with violently appealing labels that would make them welcome additions to the funkier wine sections of a high end bottleshop but are also made from clear glass.

This is typically a massive no-no in the world of beer – at least craft beer – due to the utter lack of protection such glass gives to the delicate liquid inside. But it's a deliberate move by head brewer Brendan O'Sullivan, who actually wants to encourage light strike. He says: "It's a character that I am very nostalgic about, growing up on Grolsch, Becks and Bavaria, and find very complimentary to farmhouse and wild beers."

Each release features a barrel-aged, mixed culture ale of some form as its base, with each aged on wine grape skins sourced from wineries across Victoria. Grampians Pinot Gris is, if you'll pardon the clichéd expression, quite the journey. It started out as a portion of the saison brewed with The Commons for Good Beer Week 2017, features fruit from Mt Langi Ghiran, and sets off bright and lively, with the character that was left in those skins leaping from the glass – soft berries, cherries and melon to the fore. But it's not long before it takes a detour and heads onto the farm, becoming both savoury and decidedly funky to boot.

Heathcote Muscat was created with WA bottleshop Mane Liquor for their 2019 Car Park Party and is a (wait for it...) wild barrel-fermented continuously-hopped NEIPA aged on basket pressed natural wine grape (Moscato Giallo) skins from Little Brunswick Wine Co. It went through heaps of stages, and we won't go into them all here, but they did include dry-hopping every week for 12 weeks in neutral French oak whisky ex-wine barrels...

The aim was to create a drink ideal for quaffing in a warm Perth car park (as well as one they reckon will stay "fresh" far longer than traditional IPAs thanks to the wild yeasts that remain within) and the goal has been achieved. The beer's Juicy heart is still detectable and the dry-hopping ensures there's plenty of fruity aromas and flavours there too. It's what else is in there that makes it stand apart, be that the dry, horsey Brett character, the softening aspect of the vanillin, or, let's be honest, the fact it's presented as it is.

NB the Muscat is only available at Mane Liquor