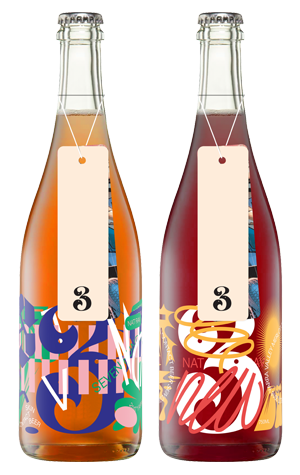 It took a while for all the moving parts to fall into place for 3 Ravens' Nat Rav series but now they're here it's quite clear that, despite the constancy in concept through the range, they're turning out to be rather different beasts. You can read more about the ethos in our write up on the first two – Grampians Pinot Gris and Heathcote Muscat – but, in the most basic sense, the beers are a blend of typically barrel-aged, mixed ferment beers with used wine grapes, all released in clear bottles.

Following those two beers is Yarra Glen Riesling and it's one for those who like their mixed ferment beers to pack a punch. The average age of the liquids at play was 22 months at release and, along the way, there have been two periods of barrel-ageing, the introduction of lactic acid bacteria,the brewery's house mixed culture and wild yeast, with the freshly pressed riesling skins added back in March 2017. And that's just for one half of the blend; the other was a 15-month-old aromatic wild ale, with the two left for a further period of refermentation in bottle.

The outcome is a drink with an intense acid profile, plenty of Bretty funk (but not too much in the way of the drying or horsey variety), the potent sweetness of old grapes and a fruity, refreshing vibrancy. One to satisfy adventurous palates.

As for Yarra Valley Merlot, it's the most wine like of the wine releases we've tasted to date. It looks that way for starters, with the base liquid – a blend of two fruity barrels of a mixed ferment beer initially brewed in March 2017 – rested on un-pressed merlot skins for five weeks before refermentation in bottle and soaking up plenty of juice and colour. There's heaps of berry character to dive into, and a little of the acid funk of the Riesling, but with less intensity or complexity. Perfumey and with a soft, rounded sourness, it flits between a spritzy merlot and a light Flanders red.