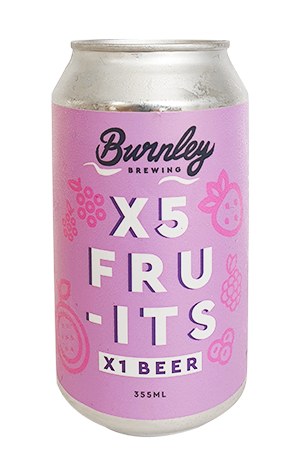 It might look like the name of another Elon Musk and Grimes kid but x5 Fruits is instead Burnley Brewing’s latest limited release. It’s one that covers fairly familiar territory for the brewery too, where they've regularly featured heavy regimes of fruit and berries in beers pouring at their Richmond brewpub. But five fruits in one can is new territory, with the beer a Berliner Weisse and the five fruits strawberry, blueberry, raspberry, passionfruit and blackberry.

It pours almost as purple as the can it’s in, making it easy to think you've got a smoothie or a sorbet in front of you but in reality it’s a particularly tart, lip-smacking sour that chases any sweetness away. I felt the raspberry and blackberry came to the fore at first but, for a beer of five fruits, each of them is remarkably well integrated.