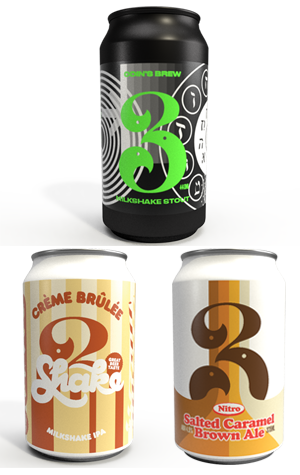 The beer world continues to surprise. Take 3 Ravens' Salted Caramel Shake, for example. Now, I've got a sweet tooth and am a sucker for salted caramel, especially in ice cream form. When they kicked off their Shake series of milkshake IPAs with a salted caramel version back in August 2018, we acknowledged it achieved its goals and presented like a low ABV barleywine. Whether you'd want more than a can at a time, however...

Well, eleven sold out batches later, it would seem there's appetite aplenty, and now there's a pair of beers riffing on that OG Ravens Shake too. They're describing Crême Brulée Shake as "the older, more mature sibling" in which they've looked to dial back the caramel fudge sweetness and add more of a custard vibe (which, clearly, is how you make something more mature...) while triple dry-hopping it with Simcoe, Citra, Mosaic & Galaxy "so we can still pretend it’s an IPA". This mélange (let's keep the accented e's going) looks like the Yarra in your glass, smells like the dessert that inspired it, is awash with buttery caramel and vanilla cream, and has a touch of bitterness undercutting the largesse. Add in a passionfruit crême hop character and buttery cake crust and you've got the antithesis to a hard seltzer right there.

The other variant is the Nitro Salted Caramel Brown Ale, which I'd argue is the more mature of the two here. Built upon three toasted and two crystal malts, a fruity English ale yeast, rock salt and minimal hopping, the dash of nitro (don't forget to shake your Shake first) adds a nougat-like layer of pillowy indulgence to the rich caramel, vanilla and toasted characters. It also ensures there's a massive body for a beer of its size and, in softening and rounding out the beer, seems to rein in some of the sweetness too.

There's a third sweet treat doing the rounds too, albeit one that's been out a few weeks at time of writing so potentially a little scarce. It's Ravens' attempt to recreate the house cocktail at Mjølner (about time another letter got in on the accent game). Odin's Brew is a spin on the espresso martini featuring Muesli syrup, coffee liqueur and goat's milk that comes garnished with chocolate and tonka beans. The beer interpretation features rye, oats, lactose, roasted malts, cacao nibs, tonka beans and vanilla. Silky yet with a little textural grit, it's a blur of chocolate, nuttiness and creamy vanilla that lacks the intensity of an espresso martini – it's more something with which you might lead into said cocktail or an after-dinner tipple to share instead of kvæfjordkake or tilslørte bondepiker.