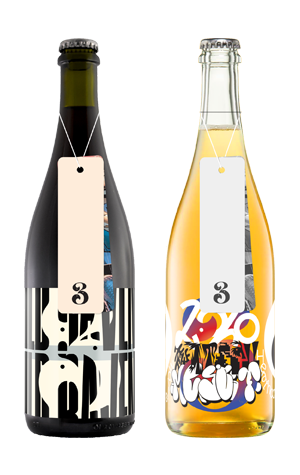 It's as if 3 Ravens have go their own microcosm of the wider beer world going on at their Thornbury home. There's the CAW range, including the trophy-winning New World IPA that warrants more attention from lovers of hoppy beers, the Juicy series, the Shake series, the Wild Ravens series, the Nat Rav series and then the beers that don't even fit into any of the above.

With the Wild Ravens, of which Methode Ravens is an annual release, there's no way of skipping over things quickly. A blend of three different liquids in 2019 – one from winter 2018 featuring German Ale malt, rolled oats and rolled rye, and aged hops with minimal bitterness that was fermented with a fruity English yeast strain and aged with their house culture in old wine barrels; a quarter cask of an unboiled, barrel-fermented wheat beer awash with lactic and acetic acid; the second fill of a small Solera project to contribute horsey, leathery and sherbet-like wild yeast aromatics – it arrives almost entirely without carbonation.

The brewers say this will increase over time with cellaring, but if you're keen to jump in now you'll find plenty of subtle complexities to explore. Vinous in texture and character, and viscous in texture and character too, there's sweet, overripe pear, creamy lemon, oak reminiscent of a heavier chardonnay, an aged malt sweetness, subtle funk and a lingering gentle acidity. It's reminiscent of the lambics served in clay pitchers in some bars in Belgium. And about as close as you're likely to get to one for some months yet, unless you can convince the authorities a visit to Belgium can be classified as a mercy run.

As for the new Nat Rav release, the Heathcote Yellow Muscat in graffiti-scrawled, clear glass 750ml bottles is another with a lengthy gestation. The ingredient / adjunct list stretched to 24 (and that's not taking into account the "various" attached to Crystal malts in the lineup). In short, it's a blend of four beers with an average age of 13 months – the oldest 26 – then racked onto Heathcote-grown Yellow Muscat wine grape skins from Little Brunswick Wine Co until all the sugars had fermented out, before being coarsely filtered and re-fermented in bottle.

In compiling their tasting notes, the brewers have gone hog wild (and why not when you've added horehound to a beer?), namechecking everything from elderflower, starfruit and peppermint to a "seconds pile" featuring the likes of caramel fudge and raspberry lemonade. If that's too much to process, imagine something that flits between disciplines, from farmhouse cider to dry white to sour beer that manages to be lean with a bracing, quenching acidity and pithy edge yet retains plenty of residual sweetness too. Just be careful with the pour; if yours is anything like mine there's ample evidence the filtering was indeed coarse.

Methode Ravens features in a live tasting on July 3