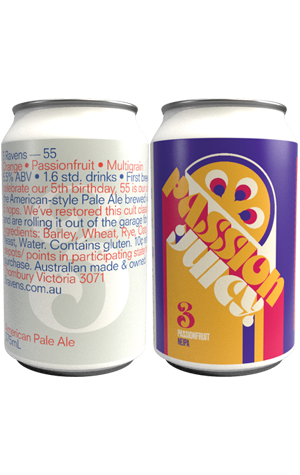 There's an interesting line to be traced between these two beers from Melbourne's longest-established independent brewery. It's one that shows the evolution in tastes within the world of hoppy, US-inspired beers, with the original 55 released in 2008 as the brewery's fifth birthday beer, featuring five hops and five grains and measuring 5.5 percent ABV. Back then, it was one of the punchier, livelier, fruitier pale ales you could pick up in Australia and became their flagship beer, only to fall away as the world moved on and 3 Ravens reinvented themselves.

This is the first time it's been brewed in more than two years, with the current brewing team looking to stay as faithful to the original recipe, albeit with the odd tweak. Given my modern Australian beer journey began in 2008 too (with 3 Ravens one of the first breweries I visited after moving to Melbourne), it's remarkable how it fares alongside today's juicy and tropical pales. Sure, there's a little citrus and stone fruit rising from the impeccably bright (no haze here) copper beer, but the hops are more of the earthy, piney, floral sort and are designed to work as an equal with the toasty, biscuity, spicy grains rather than demanding subservience from them. The bitterness is there to keep it in pint territory too; a very beery pale.

And then there's Passion Juicy, the umpteetnth entry in the Juicy series, where they combine Amarillo, Galaxy, Strata and Zappa hops with passionfruit juice to create a brekkie juice like liquid. There's an upfront Passiona hit with a creamy vanillin backing track that paves the way for a potent mix of the dank and the fruit bowl. There's a pulp like texture and a gripping bitterness that make it one of the most resinous, tangy Juicy releases to date – and a lifetime away from what passed as a hop forward American-inspired pale ale twelve years ago.