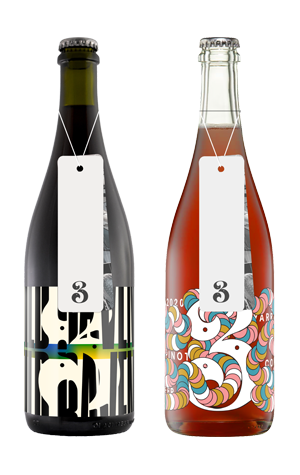 The notes we receive from brewers when they release new beers vary greatly. Sometimes there's nothing more than what's on the label, sometimes there's a media release telling the story behind the beer. And then there's 3 Ravens, who like to detail every ingredient, every process, the age of liquids involved in any blending plus both short and extended notes. And, in Hay, Hops & Horehound they may have set a new record with the extended copy clocking in at 470 words.

In short, it involves a family of farmers from Berrigan, NSW, the exchanging of grain and spent grain, nano-malting, straw and weeds. The result is "a bitter farmhouse ale brewed with house-malted triticale, Ford wheat straw, horehound and hopped at five stages throughout brewing and fermentation with large quantities of aged hops". Later on, some of the beer was transferred onto 15 grams pre litre of whole cone HPA-016 hops from Hop Products Australia originally intended for a fresh hop beer before blending with a ten-month-old, un-hopped oat-driven, barrel fermented sour beer.

Aromas are of the floral, woody, spicy kind, while conjuring memories of herbal tablets, and there's a distinctive hay-driven funkiness lurking with intent underneath as well as a peppery, tannic dryness. That's all wrapped up in a full, oak enhanced smooth texture, making for another complex farmhouse-themed addition to the Wild Ravens series.

The Nat Rav 2020 Yarra Valley Pinot Noir continues their series of beery twists on natural wine in which barrel-aged and blended mixed ferment amber and red beers were re-fermented on wine grape skins with plenty of juiciness left in them. In base terms, the Nat Rav releases are two drinks in one – beer and elements of wine – and the experience here can be described that way too, especially if you spend long enough in its company.

Vibrant juicy berry characters from the grape skins give you an experience akin to a natural wine early on. Sure, there’s hints of malt sweetness and oak but the berry character leads on both nose and palate with tannins merely adding to that vibrancy. Allow it to warm and the Belgian-esque, oaky, aged, bug-derived elements bring their quenching acid to play to the point it's borderline Flanders red in nature once close to room temperature.